The Outsourced Tech Economist: How a black-swan bull upended the tech ecosystem (Part 1)

John is a member of RBCx’s banking team, where he predominantly supports early-stage clients across capital fundraising and strategic growth. In addition to this role, John works alongside RBCx’s capital team on both direct, indirect (fund-of-funds), and strategic investment opportunities.

For readers with only a few minutes to spare, here are this piece’s key takeaways

For the last decade, the technology industry was led by a handful of well-known tech pioneers, otherwise known as the FAANG’s (or now MAANG’s, thanks to META). With decades of business building under their belt, these companies established mass distribution, scale, and network advantages while utilizing their deep resources to attract top talent and continuously beat down their competition by any means necessary (enter the Federal Trade Commission’s big-tech antitrust agenda). 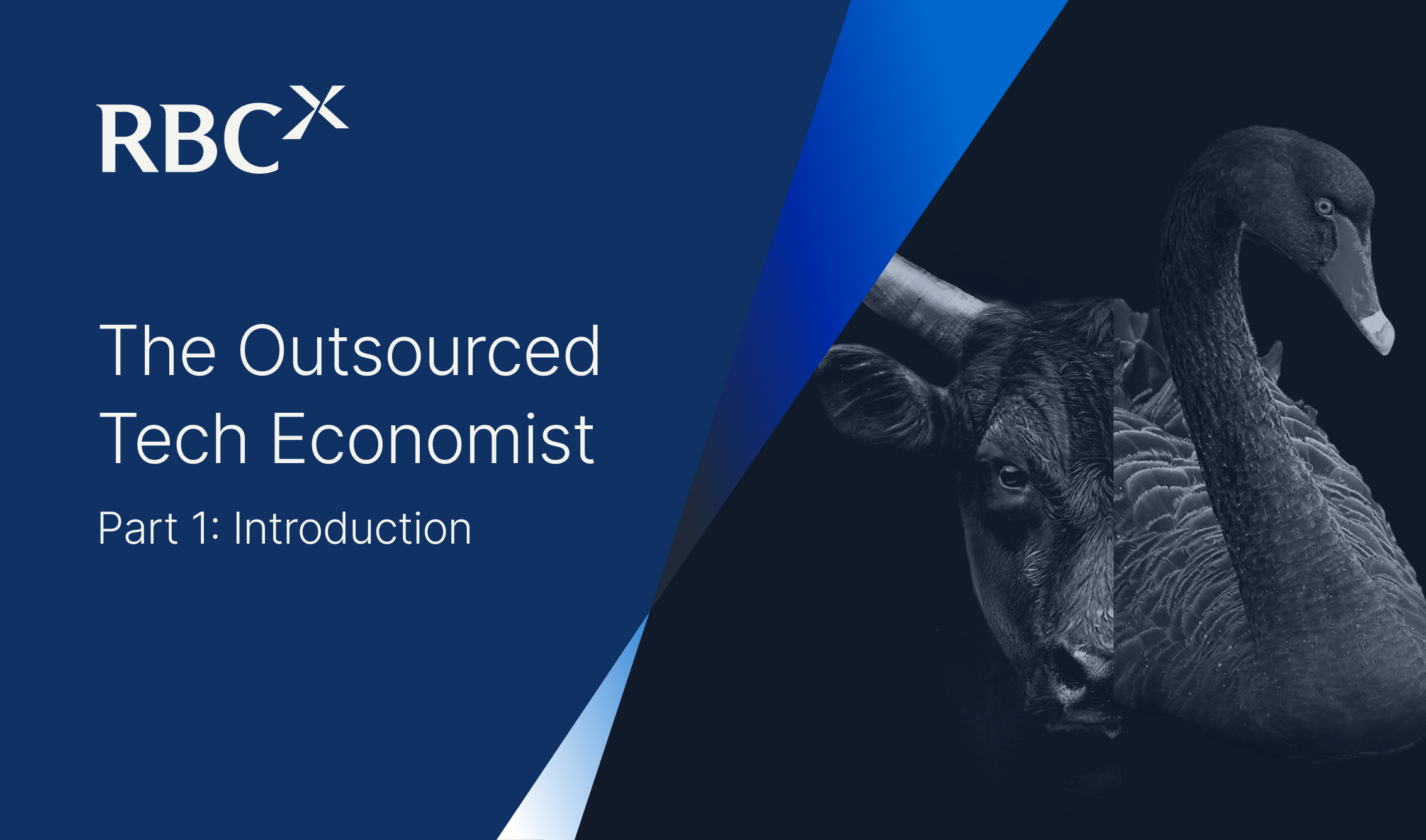 Up until recently, nothing had managed to stunt their growth, and our market seemed to think they were ‘too tall to fall’. Yet, over the course of the past month, a barrage of notable announcements changed this:

Though these headlines are concerning for the outlook of our tech ecosystem at large, there’s a deeper insight that’s far more worrisome, but less discussed. The root causes that forced our most protected tech companies to make these adverse changes weren’t driven from poor internal decisions or inputs. Rather, they were sprung from a barrage of unexpected and uncontrollable external factors that changed the macroeconomic environment our tech ecosystem is built upon.

This article series will cover those mosaic of factors, along with the macroeconomic impacts to our technology sector that occurred over our black-swan bull (i.e. 2020 to 2021, when we were hit with a black swan event at the end of a decade-long tech bull run).

Over the past ten years, our technology ecosystem was underpinned by two main factors. First, a bull market was propped up by near-zero interest rates, predictable inflation, strong economic growth, and continuous access to capital. Second, an adoption of a ‘growth at all costs’ playbook which spread across both technology building and investing. As that playbook received greater adoption each year, and investors moved further along their risk curves, the need for near-term profitability and cash generation became an almost foreign concept for tech. Rather, our industry-renowned ‘tech multiples’ drew operators and investors to over-index in one area: valuations.

As the past decade’s macro environment remained strong and capital was widely available, the market managed to support two primary categories of tech companies (see below).

The first being what I call Proven Leaders: companies building proven business models in a favourable macroeconomic environment. These companies could operate either profitably (and not rely on external funding) or unprofitably (given a high-burn rate is justified when achieving strong product-market fit and customer demand). Proven Leaders are built with strong financial discipline and business fundamentals, and aren’t easily affected by macroeconomic sentiment because they were never overly-reliant on macro in the first place.

And then there are what I call the Growth Seekers: companies that have yet to prove out the fundamental, long-term competitive value of their business, but have managed to grow by placing an excessive reliance on a liquid private capital landscape to offset a weak financial profile. In following the market’s growth-first playbook, Growth Seekers do not have the means to justify a high-burn rate, and they remain susceptible to the adverse effects of a sudden macroeconomic shift. 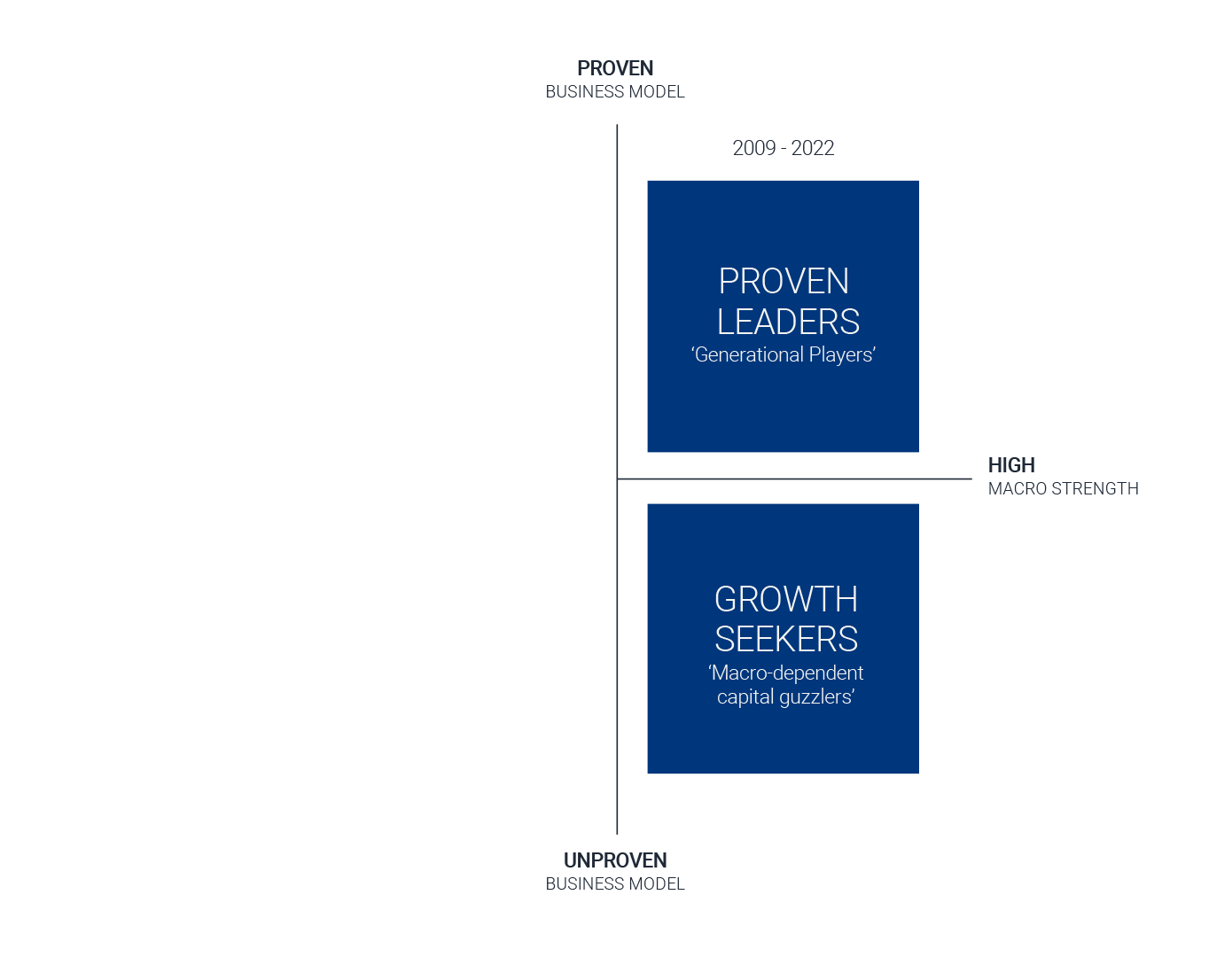 As 2022 cultivated a new macroeconomic regime to emerge in response to our black-swan bull – consisting of consecutive record rate hikes, runaway inflation, frozen monetary policy, and sharp valuation sobering – tech companies themselves were forced to change just as drastically.

Coming out of the black-swan bull and into an environment with low macroeconomic strength, Proven Leaders have morphed into Shielded Builders. These companies undoubtedly look overvalued (as with the majority of growth assets), but will maintain a high propensity for private capital going forward. Yes, they may require minor changes put in place regarding both financial and operational hygiene, but Shielded Builders will be continuously supported from an established level of market demand, given their already-proven business model. Shielded Builders are best equipped to withstand the macro volatility ahead and gain further market share from their worse-off competition.

And for previous Growth Seekers, they have entered what I call, the Danger Zone: where they now have to fundamentally re-tool their business and be limited in the time they have to do so (see below). As Warren Buffet famously said, “Only when the tide goes out do you discover who’s been swimming naked.[5]”

As we saw through the first half of 2022, the course of action for companies in the Danger Zone is to utilize the capital raised during the black-swan bull to build into their previous valuation. In parallel, they must undergo deep cost cutting to hopefully make it through the other side. Unfortunately, not only has this caused over 95,000 global tech layoffs in 2022 alone, but it will also trigger a silent reckoning for many tech companies in their entirety. 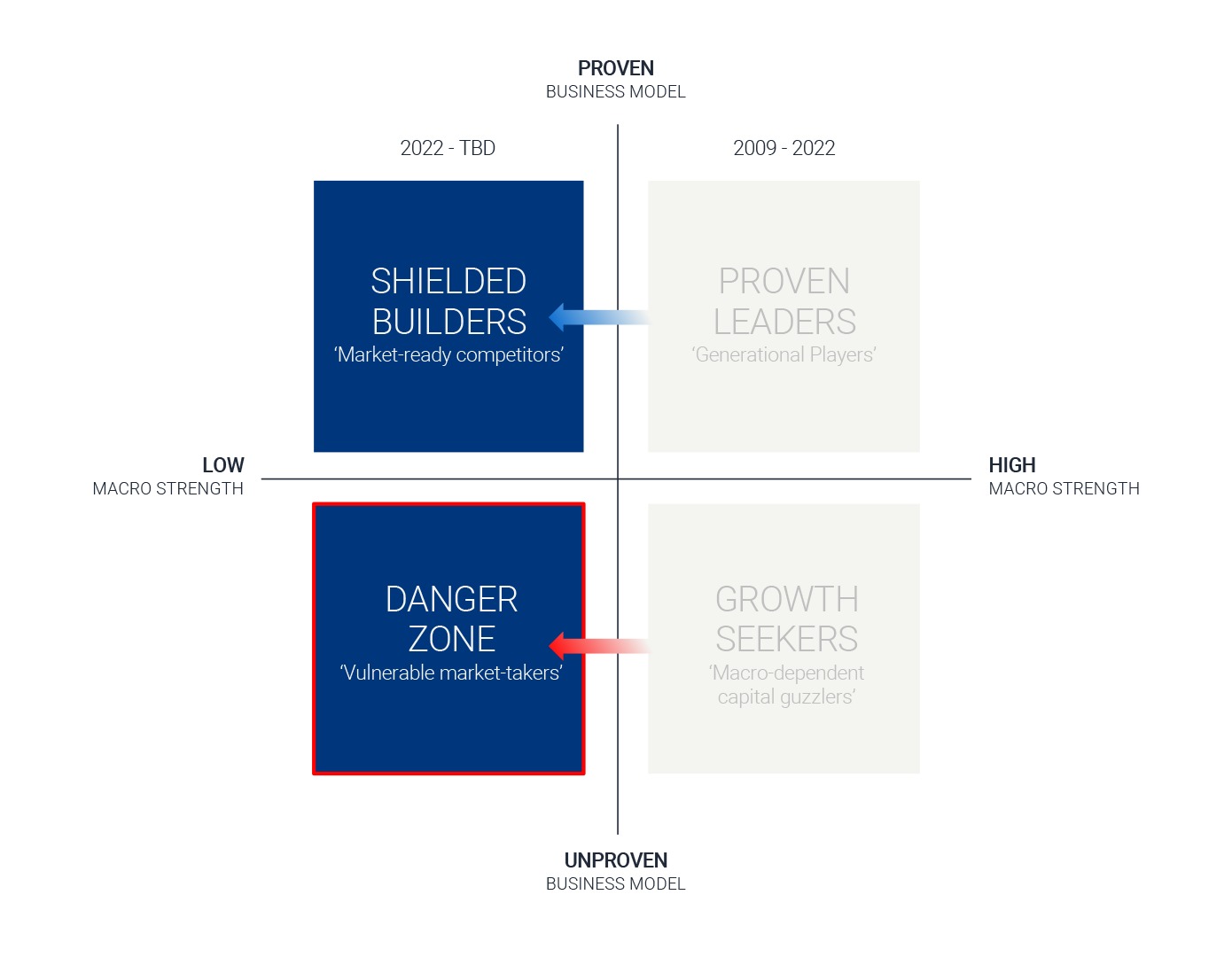 As someone who entered the tech ecosystem at a time we all thought was “normal,” it’s now clear that the technology era ahead will look vastly different post-pandemic and post-bull. To play a role in shaping that next era, it’s critical that our collective ecosystem understands the key drivers that got us to this point and that we use those insights to ensure a brighter tech future. When you boil it down, I decided to write this series after coming to four main realizations:

This is the start of a four-part series, stemming from conversations with various founders, investors, partners, and colleagues across our tech ecosystem. Coming out of these conversations, I’ve decided to focus on prominent areas of technology most impacted by the macroeconomic environment during our black-swan bull and through the first three quarters of 2022:

Welcome to The Outsourced Tech Economist and stay tuned for the next edition, which will discuss the macroeconomic impacts on capital accessibility.