Sid Paquette Has a Plan to Become Undisruptable

Don’t let RBC’s old age fool you. While the bank boasts nearly as much history as Canada itself, it refuses to simply settle into the role of a wise elder. Rather, RBC wants to compete with tech’s biggest innovators, tapping its deep experience, capital, and networks to come out on top.

They say big ships steer slow, which is a nonstarter in today’s fast-paced tech landscape. This makes finding the right captain for the job—one who can deftly translate size and ambition into speed and real-world results—essential.

Enter: Sid Paquette, the man charged with merging and leading two of RBC’s most innovative arms. Sid was first hired three years ago to lead RBCx, the tech and banking innovation platform of RBC. In April 2022, Sid was also appointed Head of RBC Ventures, a cutting-edge group tasked with going beyond banking to solve problems in strategically important areas.

Now, both arms unite under a rebranded RBCx. It’s a powermove that will reshape Canada’s innovation ecosystem and amplify RBCx’s role as a key industry leader. 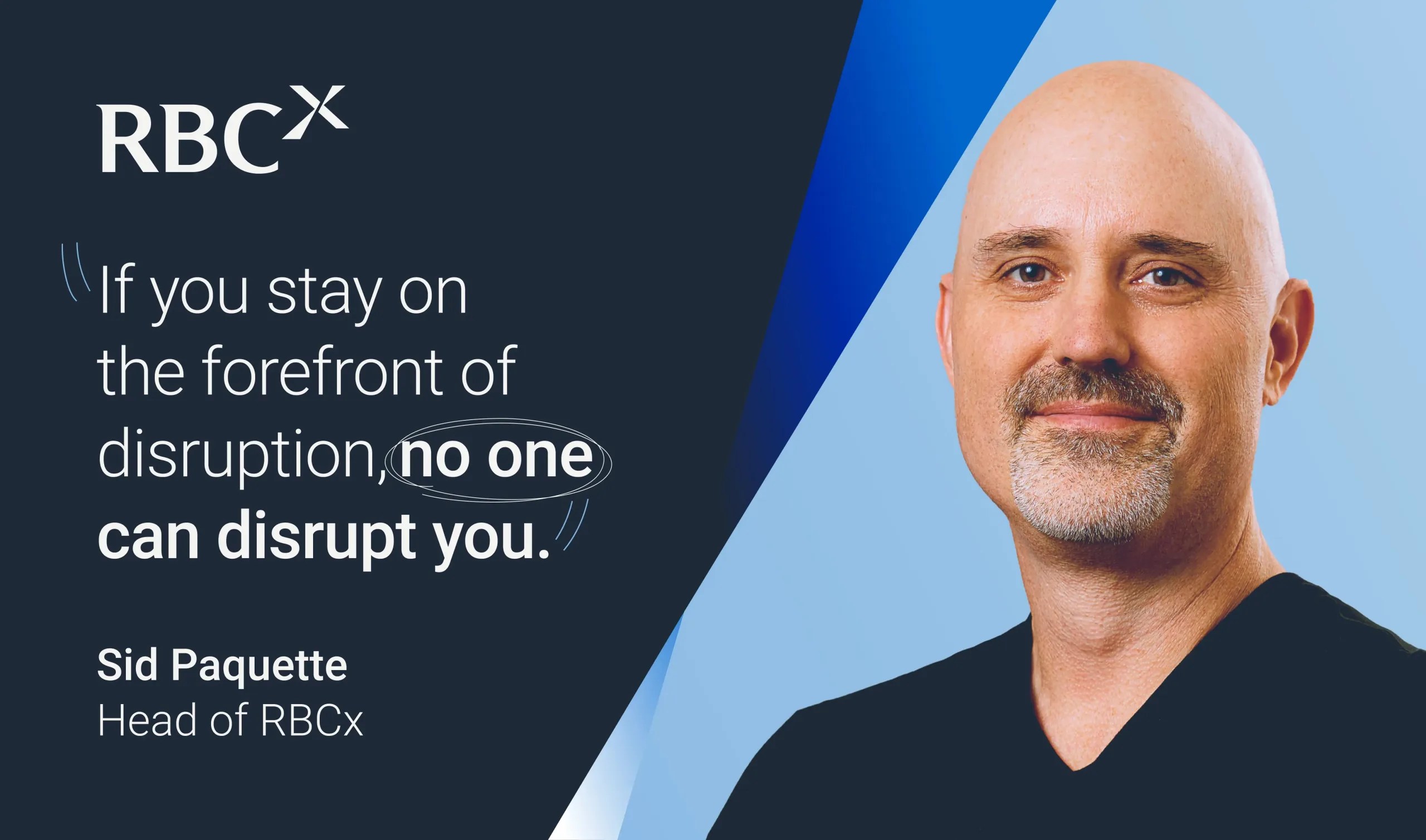 “In a short period of time, RBCx established itself as one of the leading tech brands in the country, and certainly within the financial institution world. It made sense to carry forward with that momentum,” says Sid.

Of course, this is all much easier said than done, but Sid welcomed the challenge. Step one was working to refine and communicate the new RBCx’s mission and brand story.

“You need to have a clear message in the market,” says Paquette. “If you can’t communicate what you do, who you serve, and how you serve them in a clearly articulated manner, then the story is broken.”

Finding the right company structure, sorting out logistical details, and implementing new operations will be ongoing projects. It’s important to Sid that RBCx will continuously transform, morph, and push itself to be a better version of itself.

Some may find this type of ongoing pursuit daunting, but Sid says it’s a process and feeling RBCx employees should get accustomed to. “Members of this team have to be super, super comfortable with ambiguity. If you stay on the forefront of disruption, no one can disrupt you.”

While RBCx lives and breathes tech innovation, its biggest assets are talented team members who come together from two separate brands to complement and boost one another under a single banner. Sid points out this doesn’t only benefit clients and partners, but provides a unique opportunity for employees.

“When you’re creating a brand and presence, the brand is an amalgamation of all the individuals on that team’s personal brands. The way we operate, the way we think about personal brand development, and the way we’re going to highlight people, will recognize and celebrate that reality,” says Sid. “The only way all of this works is with the amazing talent that we have.”

Sid believes talent needs to be recognized not just internally, but publicly as well—and RBCx fosters the perfect environment for that to happen. Team members will be powering the biggest names and up-and-comers in Canadian innovation, which will give them outside exposure and spark invaluable word-of-mouth conversations.

“People will talk, and they’ll be talking about ‘the rockstar at RBCx who helped me grow my business,” Sid says. “Now, all of a sudden, your personal brand explodes based on the value you’re driving, and it’s not siloed under one organization,” Paquette says. “You’re exposed to the world.”

When it comes to the core bank, RBCx’s value extends beyond making a mark in the tech space or powering a bold future. “If you altruistically help RBC business units, internal ventures, and external companies reach their objectives using the platform we have built, there is zero question that this will help the core bank,” says Sid. “ When you focus on providing value, the P&L impact will always follow. We’ve already proven this on the tech banking side”

As ambitious as all of this sounds, Sid’s metric for success is as straightforward as it can get: “I just want us to be the driver of change both internally and externally.”

With the official launch of the new RBCx, Sid and his team are well on their way.