Skip to content
RBCx Ideas > Opinion > Opinion: All That Glitters Is Not Gold: Of Tigers And Paper Unicorns, Part 3 of 4

Opinion: All That Glitters Is Not Gold: Of Tigers And Paper Unicorns, Part 3 of 4

Innovations that disrupt complex systems often have unintended consequences. In the case of crossover investing – pioneered by the likes of Tiger Global, Coatue Management, Altimeter Capital and others – that unintended consequence is a destabilization of private market valuations, and an introduction of unprecedented inflation and consequent volatility in late stage venture capital.

Crossover investing – ascendant since 2019 – is a fundamental innovation in the world of venture capital and growth equity. In the simplest terms, crossover investors are those that deploy capital in both public and private companies, generally with a contiguous lens and overarching strategy.

As described in Part 1 of the series, the crossover strategy is a broad-based, high-velocity, portfolio strategy. Crossover investors deploy funds broadly into a large number of companies, they deploy capital rapidly and passively, and they invest with a lens for portfolio construction rather than single company exposure.

The model’s innovation is in the upending of two fundamental pillars of traditional venture capital – active management, and thesis investing. This has altered the calculus for many founders, and it has introduced new pressures on growth stage investors. This post however will delve into the ramifications on upstream investment funds, namely early to mid-stage venture capital funds.

In the traditional venture model, when a fund invests in a company, fund managers work closely with management to support and notionally keep apprised of the business. This is the active management component of venture. Investors are not pure capital allocators, they’re also asset overseers. They have a privileged relationship with the business, and generally do not invest in competitors.

Venture funds also develop theses around markets, technologies, and competitive landscapes, before investing in a relatively small number of companies. In other words, venture investors place bets and they invest with a thesis. They are not passive portfolio managers in the colloquial sense. 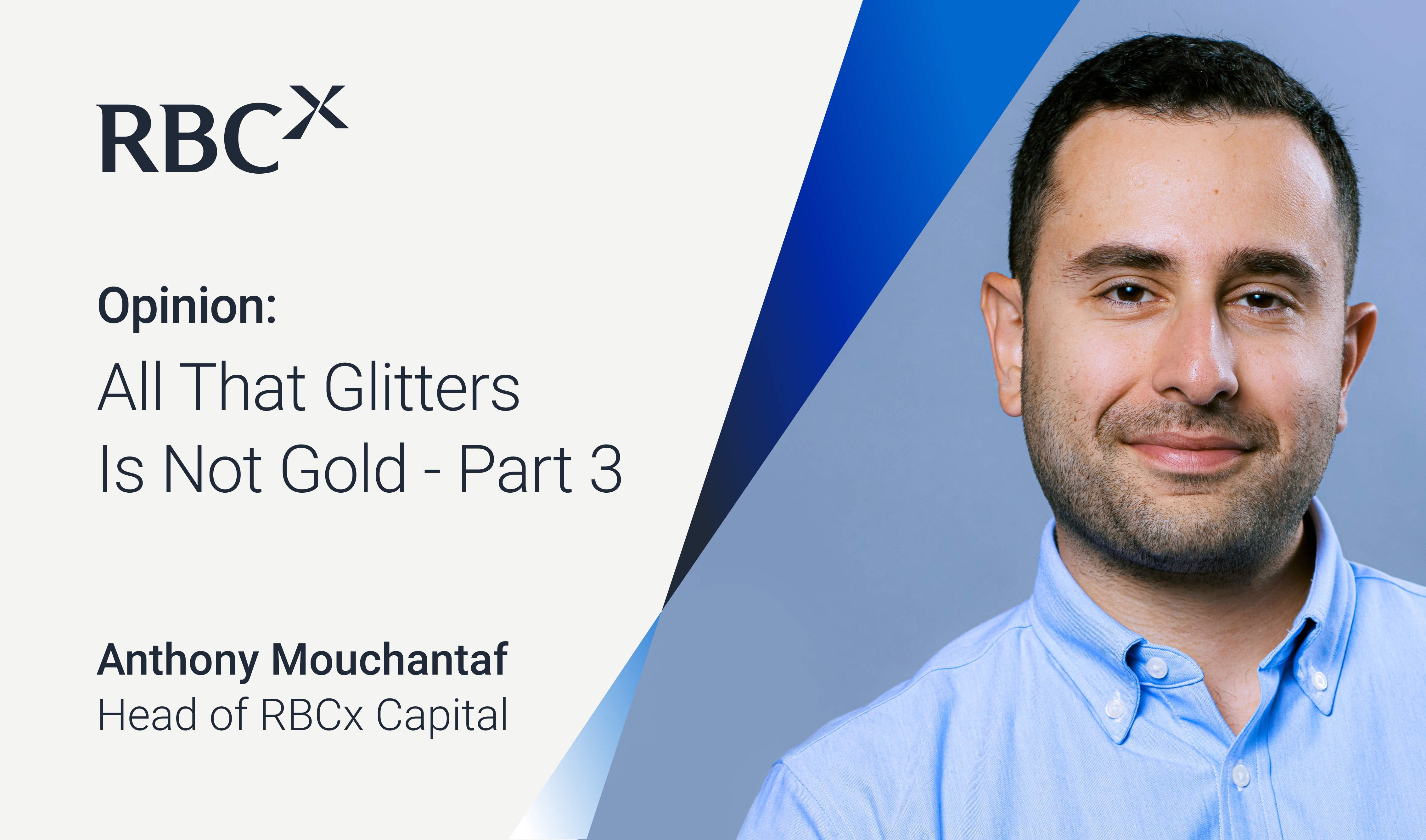 This model works well in many ways, but it also has its drawbacks. Actively managing a portfolio of companies and developing complex investment theses is labour intensive and unconducive to scale. As venture firms grow AUM they must constantly add new partners and can only manage so many investments while continuing to deploy new capital. With some exceptions this challenge functionally caps the size of a fund’s portfolio and its ability to truly deploy capital at scale.

While it’s common wisdom in public markets that diversification and index-investing are essential components of portfolio construction, venture capital remains the private-market’s equivalent of individual stock-picking. Some venture investors beat the market, but most don’t. Regardless, investors haven’t traditionally had an avenue to a truly diversified basket of private tech stocks. This is a natural result of the restricted scale of active management and the asset concentration deriving from thesis investing.

Crossover investing solves both challenges. First, by investing passively – i.e., by forgoing board seats and active asset oversight – crossover strategies are naturally more scalable than traditional frameworks. They’re able to deploy much larger volumes of capital, more rapidly, and in a more diversified manner. From an individual company’s perspective, this makes sense as well. Growth stage businesses typically have sophisticated infrastructures and processes, abundant resources, and experienced advisors around the table. In these instances, it’s not evident that additional investor oversight adds any incremental value.

Second, this portfolio strategy is not about gaining conviction that every individual investment will be successful, but rather about building an index of private equities that as a group will generate sufficient benchmark returns. The portfolio strategy allows crossover funds to deploy capital along heuristic parameters, rapidly, and with minimal comparative diligence.

It’s customary in venture capital to carry the value of illiquid private market investments at the enterprise value of the most recent private market fundraise. It’s a flawed system, but it’s transparent and it’s consistent, so everyone just sort of lives with it. Recently, with capital being pushed down from public markets into late-stage private markets, the system has been disturbed with artificial inflationary pressures. With so much capital entering the fray at the pre-IPO late-stage, TVPIs (Total Value to Paid-In Capital) have skyrocketed, but DPIs (Distributions to Paid-In Capital) have lagged. In other words, venture capital firms have had record years, but it’s all on paper, with minimal actual cash-on-cash returns.

Unicorn private market valuations significantly bound the universe of possible acquirers, meaning that the route to liquidity is increasingly likely to flow through IPO rather than through M&A. This can pose a major challenge. Public markets are more volatile than M&A markets – i.e. there is no agreed upon clearing price, and as of late, public markets have slashed 2021 vintage tech IPO valuations by over 75% in many cases. Now remember, the crossover strategy is a portfolio strategy, so public corrections are built into the model. For upstream, non-diversified venture investors, however, the impacts can be stark.

Despite eye-popping 2021 results, behind closed doors savvy LPs have concluded that paper write-ups will not likely translate into cash distributions on a one-to-one basis. Rather than question whether there is late-stage valuation inflation, LPs have moved on to trying to measure and understand its impact.

What does this all mean? In 2021, VCs were able to raise capital on the back of phenomenal write-ups. While a rising tide lifts all boats in the short-term, in the medium-term the market will re-calibrate.

With crossover investors introducing inflationary pressures and pricing instability in paper valuations, investors will need to adjust to new benchmarks. In the medium-term, expect venture fund managers to have a more difficult time fundraising as the market separates the signal from the noise and settles into a new normal.

In a natural, healthy state, our industry is characterized by power-law distributions, with the majority of the economic and financial windfalls accruing to the top decile and quartile of venture capital firms and technology companies. With firms recording unnatural write-ups on paper, the distribution has temporarily been distorted (the noise). However, as winners emerge and the dust settles in the public markets, the normal distribution will become apparent again (the signal).

Investors and LPs should remain cognizant of the fact that the crossover model is a portfolio model, and the model still works when there are individual write-downs within the portfolio. Crossover investors need not assume that all of their investments will grow into their valuations for their model to work. Many – but not all – crossover investors will still be successful at scale, but the volatility that they create will be pushed down to earlier-stage investors.

For these reasons I believe emerging trends – namely hurdle rate erosion and shorter deployment cycles – will come under pressure for the bottom three quartile managers.

Funds that once took 3 to 4 years to deploy capital are now doing so in 18 to 24 months, while once ubiquitous preferred return rates of 7% to 8% have precipitously dropped and in many cases have been scrapped altogether. As macro trends continue to shift and volatility seeps into private market valuations, I believe LPs will begin to balk at cycle contraction, vintage concentration, and hurdle rate attrition.

The exception will be the top decile – and to a lesser degree top quartile – of fund managers. As LPs become more selective, and returns gravitate and crystalize at the top, expect to see a renewed flight to quality.

What It All Means

Later-stage technology companies are, by and large, fast-growing, well-run businesses, with demonstrable product-market fit. Market corrections are not indicative of asset bubbles, but rather of natural provisional adjustments in capital markets and evolving macro conditions.

Finally, the proliferation of crossover investing should give rise to increased scrutiny and discussion on the part of regulators as it pertains to the Accredited Investor rule. By blocking retail money from private markets, regulators are unintentionally creating a pent-up capital surplus in private markets that’s suddenly released into public markets post-IPO. This benefits private institutional investors by driving up the price of their existing assets, while prejudicing retail investors who may only invest after the IPO event horizon. Lockups may contribute to attenuating this challenge, but they don’t go far enough. To ensure retail investors are not left holding the bag and bailing out bad private market investments, regulators need to consider how to allow retail capital to flow into private markets at scale and in a diversified manner. For a capitalist economy to thrive, regulation must be as much about empowering as it is about protecting, and an even playing field of access is tantamount to that goal.