Skip to content
RBCx Ideas > Opinion > Opinion: All That Glitters Is Not Gold: How Central Banks Have Been Thumbing The Scales For Tech, Part 4 Of 4

Opinion: All That Glitters Is Not Gold: How Central Banks Have Been Thumbing The Scales For Tech, Part 4 Of 4

Sudden changes to one constituent part of a complex system will often have unforeseen consequences on seemingly unrelated parts of that same system. This is perhaps most evident in the realm of modern economics, where monetary authorities wield immense power to affect change upon the system. When central banks cut interest rates and embarked on an unprecedented Quantitative Easing (QE) campaign in response to the COVID-19 pandemic, they inadvertently created a tech asset bubble.

Over the preceding two years, generally stable incentive structures were upended by monetary authorities around the world.

Beginning in early 2020, the U.S. Federal Reserve and the Bank of Canada – colloquially the “Fed” and the “BoC” respectively – slashed interest rates and launched unprecedented QE programs.

These policies thumbed the scales in favour of private tech assets and public tech stocks, giving investors an influx of capital to deploy with a strong incentive to over-index on tech. Now, both the Fed and the BoC have signaled that they will begin to gradually remove their thumbs from the metaphorical scale. This is contributing to the public tech stock correction, and this will inevitably flow down to private markets in the coming months.

Part 1 of this series highlighted “transient macroeconomic abnormalities” as contributing to the tech boom cycle. The graph below illustrates the size of the BoC’s balance sheet over the past 25 years. Can you spot the abnormality?

Quantitative Easing – or QE – is a policy tool employed by central banks to stimulate economic activity when reductions in short-term interest rates alone are insufficient. 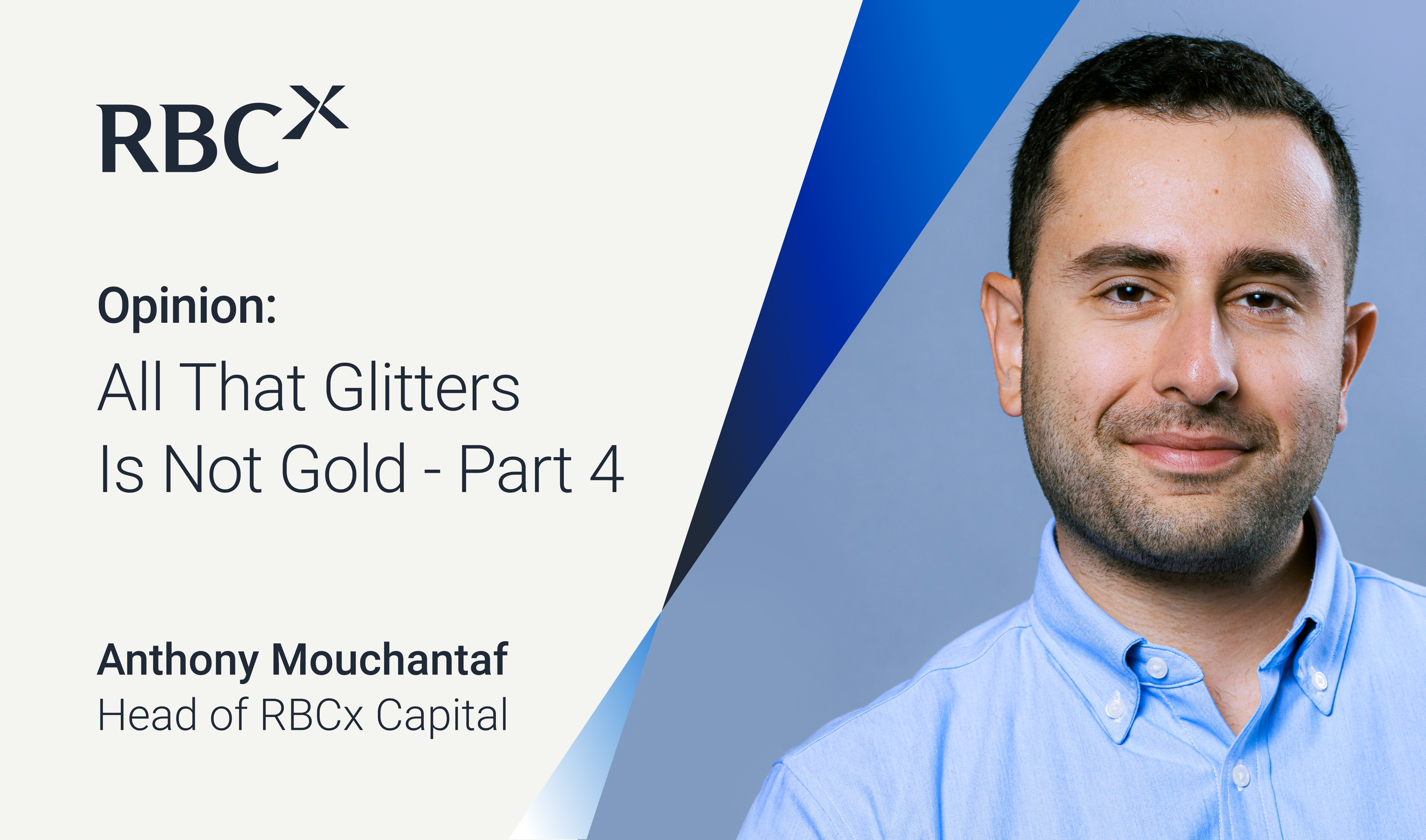 When a central bank purchases bonds on the open market, it creates an influx of demand, which bids up bond prices. As bond coupons remain static, this activity puts downward pressure on bond yields, making them less attractive to investors. Most importantly, as the central bank removes bonds from circulation, it replaces them with liquid capital. Therefore, the immediate impact of QE on financial markets is to create excess liquidity while simultaneously eroding the value of high-quality fixed income securities, which incentivizes a capital reallocation towards equities and alternatives.

In response to the pandemic and the initial lockdowns in 2020, the BoC embarked on a historic QE campaign. In relative terms, the BoC’s QE campaign dwarfed the Fed’s concurrent program, though the latter has naturally received more coverage and scrutiny.

The graph below illustrates the volume of Federal Canadian bonds on the BoC’s balance sheet. In the months following the initial 2020 lockdowns, the BoC injected hundreds of billions of dollars of liquidity into the market and plunged both short-term and long-term interest rates. The sudden spike in liquidity that this released into Canadian financial markets has been stark and unprecedented.

In theory – and so far in practice – QE disproportionately impacts the technology sector. As QE programs generally target longer-term bonds, they tend to deflate long-term yields. The U.S. 10-year Treasury Bond and the Canada 10-year Government Bond represent the most appropriate risk-free alternative on which to discount venture capital investments and public tech stocks.

Venture capital funds generally have a 10-year lifecycle, and pre-profit public technology companies typically expect to breakeven within a 10-year time horizon. Technology firms are fast growing, cash burning enterprises that only generate free cash flow far into the future. Because of this, they are inordinately impacted by changes in interest rates relative to their legacy peers.

Setting aside the math, recall that economic actors simply respond to incentives, and economic reality often deviates from economic theory. Think of bond yields as the risk-free alternative to tech equities. When that alternative is only generating 0.5% annualized returns, investors are incented to invest in tech. As risk-free returns rise however, incentives shift away from equities and towards fixed income. Markets generally don’t crash or ascend violently, but their trajectories can often be bent or altered to create vastly divergent outcomes in the long run. As a general rule, institutional asset managers tend to be more attuned to economic theory and tend to have the scale to move markets. Something as benign as an amended discount rate in a valuation model could trigger asset reallocations that completely alter an otherwise fundamentally unchanged ecosystem.

The precise macroeconomic trajectory remains unclear. If recent inflation is indeed transitory and primarily related to supply strains, then small scale balance sheet contraction on the part of the BoC coupled with scheduled rate increases could return yields to stable pre-pandemic levels. In my opinion, this is the most likely scenario. Pre-QE 10-year bond yields hovered between 1.5% to 2.5%. Today U.S. and Canadian yields are around 2.0% and 1.7% respectively, with the market pricing-in rate hikes and bond selloffs by the central banks. If the BoC balance sheet trends back to its pre-pandemic levels and long-term yields hold steady, then the worst is over from a public stock correction standpoint, albeit with remaining ripples down to private markets.

Conversely, monetary authorities have consistently underestimated rises in inflation over the past several months, and most recently the U.S. Consumer Price Index (CPI) rose more rapidly than expected in January, reaching 40-year highs. If inflation proves to be sustained and systemic, then the BoC will be forced to increase rates more aggressively, and to rapidly sell-off its fixed income assets to remove liquidity from financial markets. If this happens, pressure on Canadian technology and innovation could mount to unsustainable levels as the market grapples with plummeting valuations on cash burning startups.

Regardless, the fact of the matter is that we are transitioning from an environment of unprecedented monetary expansion to one of equally unfamiliar monetary contraction, and prudence requires us to take tangible action in anticipation of these macroeconomic shifts.

For investors this means re-focusing on business fundamentals and applying greater discipline in relation to capital allocation. Growth is important for tech firms, but secondary metrics like gross margin and customer acquisition cost – or CAC – are indispensable in a contractionary monetary paradigm.

Together with churn, CAC is an important proxy for product-market fit. If CACs are too high – i.e. if a company needs to spend excessive amounts of capital to acquire new customers – then the company’s product offering may not be in demand or its market may be saturated. Alternatively, a low CAC means that a company can efficiently sustain its growth while its higher CAC peers stall in the absence of readily accessible capital. Normally, investors consider CAC in the context of a typical customer’s lifetime value (LTV), which incorporates an analysis of customer churn. However, when macro conditions are unfavourable, a CAC analysis in isolation might be more appropriate to assess a company’s ability to maintain momentum if its access to capital markets subsides.

Though investors can take tangible action to attenuate the volatility, fiscal policy has an important role to play in offsetting any sudden retrenchments in the monetary outlook. On that basis, there’s a compelling counter-cyclical argument for an expansion to the upcoming Venture Capital Catalyst Initiative Program (VCCI) that we discussed in Part 2 of this series. By increasing VCCI allocations, the Federal Government can prophylactically counter any major shocks to Canada’s innovation ecosystem that are inadvertently manufactured by monetary authorities.